Region rendering allows you to render only a small part of the scene. This is similar to moving the camera, but is useful when you need to focus the render on a part of the full image.

As of version 4, Indigo lets you render multiple regions sequentially and/or simultaneously. There is also an option to either render the region(s) on top of the full image buffer, or on an alpha background outside the regions for compositing in post production software.

To use region rendering, simply enable the "Pick Region" button from the tool bar. This will enable Region Render under Imaging settings, and will let you select your region by using LMB + drag. To render multiple regions at once, hold Shift or Ctrl and drag.

To render your regions on an alpha background, enable the "Zero alpha outside region" checkbox below the Region Render one. This option can be enabled and disabled without re-rendering. 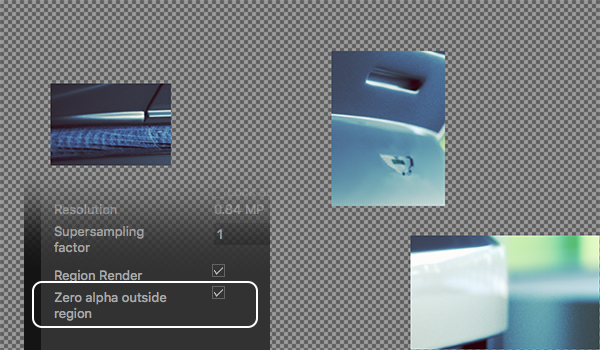